This presentation will discuss the effects of changing the Flux density in the airgap of a Permanent magnet Brushless Permanent Magnet Servo motor on the overall motor performance. The air gap flux density is the major parameter that a motor designer will base a motor design on. This presentation will show that the motor magnetic circuit designs can be modified to allow maximum motor performance with lower energy grade magnetic materials than the present high energy rare earth magnets. The higher energy rare earth magnets used have always had a higher cost but now that some of the rare earth components have become harder to source, the need to use mid range energy magnet materials could become necessary. This has started a trend to mix the various magnet materials which can change the magnet performance to values that were not available in the past as single magnet materials. The airgap flux density in this presentation will be varied from 3 KG to 9 KG and the effects of this variation of the airgap flux density on permanent magnet motor designs will be shown.

in small iron thicknesses and a large area for the copper windings. The diagram on the right shows a motor with a high airgap flux density with thick iron cross sections and a small area for the copper windings. The number of turns in the winding is directly proportional to the airgap flux density when the stator diameter and length are kept the same. This can be shown from the equation for voltage generated in a coil passing thru a magnetic field, V = B * L * R * N, where V is voltage, B is flux density in Tesla, L is the length of the airgap in meters, R is the radius of the airgap in meters, and N is the number of conductors in the field. This shows that if R and L are kept constant, the number of turns will decrease as the airgap flux density is increased when the voltage generated is kept constant in the same motor design of airgap length and radius. The effect of decreasing area and decreasing turns in the slot shows a relationship of the two that will be looked at in the examples given in this presentation.

The motor performance can be measured in several ways for these comparisons. The most direct way is to measure and plot the motor constant which is defined as the motor torque constant divided by the square root of the stator resistance. If the top and bottom of this equation are multiplied by current then the equation would give the motor constant as the torque delivered by the motor divided by the square root of the power term I^2*R. By playing around with these parameters of torque and dissipated power loss, it can be shown that the motor constant is effected by the airgap flux density and the amount of copper in the slots along with the motor stator OD ,ID and length. Since the desired motor performance would be to get the most torque out of a motor with the lowest power loss, the Km will be at a maximum when the Kt value is high and the resistance is low.

Both the turns per coil and wire sizes are fixed whole numbers. This will cause the motor Kt to vary from the desired value and would skew the data. This presentation will use fractional values for the turns and wire sizes to keep the Kt a constant value at any value of airgap flux density. This will show the theoretical information for comparisons but would not represent actual values obtained in a true design. The comparisons done in this presentation will plot the motor constant as a function of the airgap flux density. It will be shown that the maximum value of the motor constant is not always at the highest levels of air gap flux density.

Another factor that affects the motor performance is the ratio of the stator OD to the stator ID. As this ratio changes, the effect on the motor constant will peak at different levels of the airgap flux density when the motor torque constant is kept at a constant value. This effect will first be shown on a motor with a stator OD of 3.6 inches and a stack length of 1.5 times the stator OD. The Torque constant in this example was kept constant at 3 Lb-In/A and the wire fill was kept constant at 40%.. This was chosen because it since it would give a motor about 4 inches or 100 mm in diameter to run an a 170 volt DC buss. This would be about an average size for a servo motor. The shaft diameter was small enough so that the rotor back iron would not be saturated at the highest level of the air gap flux density. This will keep the rotor geometry effects out of the example and keep the comparison to the airgap and stator. Figure 3 shows the effect of the motor constant as the stator OD to ID ratio is varied from 0.5 to 0.65. 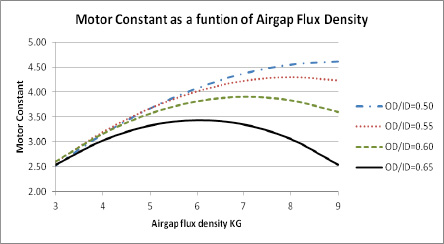 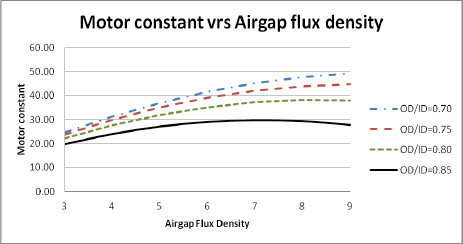 Figure 5 – Changing the stack length as the Bg changes